Can you safely exchange knowledge about your invention with an NDA in place or not? 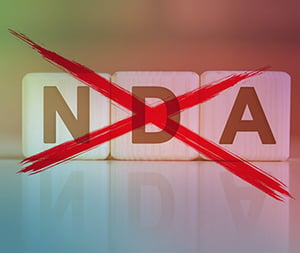 Most independent inventors and startups reach a point during their development process when they want to share knowledge about their invention. When looking for partners or investors, for example, it is desirable to be able to talk openly and concretely about that invention. However, there is a risk here if you still want to protect the invention with a patent. A Non-Disclosure Agreement (NDA) would seem to be a solution in such cases. You then basically have three options.

Option 1: an NDA drawn up by a lawyer

There are varying degrees of how well an NDA is tailored to your situation. A lawyer can draw up the best possible NDA, which is best suited to your situation. A lawyer will, among other things, ensure that the sensitive information is properly defined and will record how subsequent improvements to the innovation are to be dealt with. However, entrepreneurs with a limited budget often need their money for further development and commercialisation of the invention. A professionally drawn up Non-Disclosure Agreement is costly.

There are also online tools with which you can draw up a standard NDA fairly easily and cheaply. This will never be as watertight as an agreement drawn up by a lawyer but can be fairly effective in some cases. The mere fact that you ask parties to sign an NDA can make them more aware of the sensitive nature of the information you are sharing. That is why it is also useful to mention the word 'classified' or 'confidential' in e-mail correspondence, and on all documents that are shared. It shows that this is sensitive information which we do not share with everyone. Sometimes that can be enough. The other side of the coin is that the more careless the NDA, the greater the risk that a conflict may arise at a later stage.

Regardless of whether you are using an NDA drawn up by a lawyer or an online tool, it is important to realise that the penalty for breaching the NDA is usually little more than a token gesture. If someone spills the beans at a drinks reception, a judge is unlikely to impose a huge penalty. That would not be reasonable and fair.

Although an NDA seems and feels sensible in many cases, there are some issues, such as the cost, it may not be watertight and the compensation could turn out to be rather disappointing. The solution? File a patent application before entering into discussions with potential partners or investors. Or talk only in terms of the results of your invention, not the technical details.

Once a patent application has been filed, you can talk freely. What's more, a filed patent application can help to actually get that partner or investor on board. Of course, this is also a financial investment, but one that pays off much better and for much longer. In addition, there are ways in which you can reduce the costs of a patent application by providing the necessary information, such as drawings. You can read here exactly how that works.

No guts, no glory: patenting...