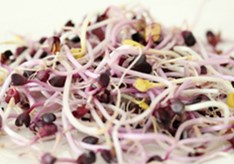 By breaking a fundamental rule of patent law, food company Taste of Nature has lost its intellectual property rights to red radish sprouts. This is an extremely expensive lesson because the competition can now market the product with impunity.

In September 2001, Taste of Nature applied for a patent on innovative radish sprouts which have become an exclusive culinary ingredient. Recently, however, the court of The Hague ruled, in a case brought by a competitor of Taste of Nature, that this patent is invalid. The company had delivered a batch of seeds for the sprouts to a customer several months before the patent application was submitted without the customer being bound to confidentiality. This customer had, in turn, used the seed to cultivate the radish sprouts and had supplied these radish sprouts to customers for consumption. The same seeds had also been used by Taste of Nature to apply for a plant breeder's right and as an entry for an innovation award.

A cardinal sin in the world of patents

According to Dutch and European patent attorney Rudi Riemens from EP&C, it is a cardinal sin in the world of patents to introduce your invention to the outside world before you have submitted a patent application. ”Although a patenting organisation is often unaware of what is known as ‘public prior use’, it is still a sword of Damocles hanging over your patent family. It is perfectly possible that it will completely destroy your patent family in the event of litigation. The court may rule that your invention is no longer new if you have exposed it to the outside world before you submitted your patent application. In this case the issue was not just that the radish sprouts had been shown to the outside world, but also that Taste of Nature had already supplied fifty kilos of seed for the red radish sprouts to a customer before the patent application had even been submitted. There was even a reference to the patent application which was submitted at a later date on the invoices sent to the customer in question”, Riemens explains.

He says it is a great shame for Taste of Nature to lose the patent in this way. “The fundamental rule of patent law is protect first, and publicise only then. Taste of Nature now not only has to pay significant compensation to its competitor for the legal fees, but the competition can now also trade the innovative radish sprouts freely without having to pay royalties.”

Taste of Nature has announced that it is going to appeal against the judgement.