David versus Goliath: knowledge is power 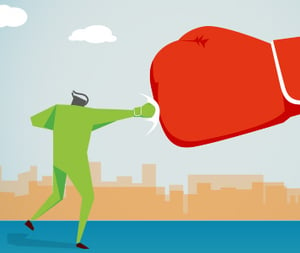 It was recently announced that a New York University cardiologist was suing Apple for patent infringement. The cardiologist claims that the Apple Watch uses a method for detecting atrial fibrillation patented by him. The case is a classic David versus Goliath one. The academic versus the tech giant. The balance of power is skewed. This does not necessarily mean that you do not stand a chance as David. Quite apart from the substance of the case, it largely depends on who Goliath is. Goliath can take two forms.

Goliath is an established party

Goliath can be a company like Apple or Samsung. A large, established party with a sizeable patent portfolio. They are particularly vigilant when it comes to infringements of that portfolio by their direct competitors and sometimes take aggressive action against these. However, their own patent portfolio does not protect them against a David (the cardiologist), because he has not actually brought a product onto the market and is therefore not infringing. It is therefore not possible for the large established party to retaliate. David is small, but invulnerable.

Moreover, this Goliath theoretically runs great risks. A patent is a razor-sharp sword with which you can shut down an entire company. Judges often do not dare to do this in practice, but that risk nevertheless often creates tensions in the boardroom. No manager of a large company wants to be responsible for bringing the organisation to a standstill under his or her leadership. They therefore have a natural tendency to settle. Just like David, because he does not gain anything by stopping Goliath.

A case like the cardiologist's one is often a calculated business risk. Large companies are confronted with these every now and again, and have provisions in place to deal with such situations, often ending in a settlement. In the US, litigation generally costs around €5 million. So in order to cover David's costs, the settlement must be significantly larger.

The Goliath can be more difficult to deal with in the case of Fast moving consumer goods. These are products that cost no more than a couple of hundred Euros, which you can make without having to invest a great deal. You make a few moulds in China and sell the simple consumer goods in large batches.

A good idea will soon be copied by dozens of different manufacturers. Because of the low manufacturing costs involved the makers hope to make a high profit in a short period of time. If they are shut down after a year or two, they will already have made a nice profit. Catch me if you can!

In this kind of market Goliath is often a many-headed dragon. As soon as you chop off one head, another one will appear.

Are multi-headed dragons like this hard to kill? Yes and no. They are just as easy to create as they are to stop, so that is tricky. However, the sales channels are often established parties: online shops like Alibaba, Amazon, eBay and Bol.com, or large retailer chains like Hema, Decathlon, Hornbach and C&A.

You might think that companies like this are not impressed by a David with a barking letter. However, experience shows that they too do not like to get involved in problems relating to patent infringements. When in doubt, they will generally remove a product from the website or take it off the shelves straightaway.

This happens so often that a whole new type of service has developed. Some companies focus purely on influencing the Amazons of this world. They often succeed in getting infringing products out of online stores fairly quickly and effectively. Completely? No, but they usually do not have to.

Do not be put off

Our client Pedal Plate, for example, has been fighting several parties who have copied their ingenious pedals for some time now. And with success. Needless to say, that costs money, but as soon as sales permit: do it! So: do not be discouraged by the gigantic sight of a large company and do not be deterred by a whole horde of copycats. A patent is a right and often it pays to stand up for that right.