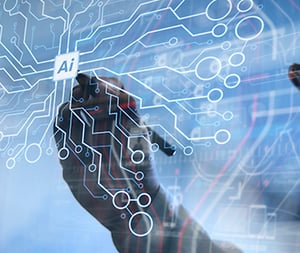 For a long time Artificial Intelligence (AI) was something we mainly saw in science fiction films. Nowadays, supercomputers and smart devices are the order of the day. Every company is hunting for data as though it were gold dust and with the rollout of the 5G network, AI is going to develop into a huge market in the coming years. It is nevertheless still very complicated to get proper intellectual property protection for AI software all over the world. When it comes to this particular field patent law has not exactly kept up with the times and is hindering the growth of this lucrative market.

However, this also offers opportunities for the country or region that is first to change its patent laws. And while such a change does not appear to be on the cards in China or the US just yet, we are expecting a decision from the European Patent Office in the very near future that may change things here. A favourable decision will offer great potential for both AI entrepreneurs and the European economy as a whole.

Before we zoom in on that case, it is good to first look at how patents are granted in general and why that is so problematic for software. To qualify for a patent, an innovation must be novel and inventive and provide a technical solution to a technical problem. Very few people would argue that AI software is not novel and inventive. The problem has to do with the term 'technical'.

Traditionally, there is not a single patent granting authority in the world that by definition sees software as a technical solution. This seems to stem from the old-fashioned idea that a computer is little more than a very fast calculator. Programs that you can use to do quick calculations are all well and good, but patent granting authorities do not consider these to be the kind of technology that we have patent laws for.

Over the years, people have moved away slightly from that old idea of software as a computational tool. From the autopilot for aircraft to operating systems for smartphones, there are many examples of software that have been considered to be a technical solution to a technical problem. That is why those particular examples could be patented. But it continues to be a complicated category.

In fact it is not necessarily the case that you have to control hardware with software in order to have a chance at a patent. Digital solutions, such as ensuring higher data compression, data transmission with better error correction, or more advanced pattern recognition in image processing, can in principle also be patented. What matters in the end is the extent to which the innovation is or is not compatible with the term technical in patent laws, and the interpretation of that term in other patent cases. Software more often falls outside the concept of technology than more traditional innovations such as consumer products or machines for which the legislation was originally designed.

For AI software this is even more complicated. It is an even newer and more abstract form of software which, as a result, even more easily falls outside the definition of 'technical'. This is yet further proof that there is a huge discrepancy between the speed at which IT innovates and patent law develops. Right now that we are at the beginning of a new era in digital technology it would be good to remove that discrepancy.

From credit analyses for banks, or support in medical procedures, to behavioural forecasting for governments or marketing agencies; AI software is used for all kinds of things. But the possibilities to protect that software still vary greatly. A program that forecasts financial situations is not considered to be a technical solution to a technical problem whereas a program that helps to extract relevant information from an X-ray is. The first cannot be patented whereas the second can.

In Europe, whether or not we can be more consistent in this seems to depend on a case that is currently before the European Patent Office. The Enlarged Board of Appeal, the Office's highest judicial body, is currently considering the possible protection of a program that simulates technical processes. The Enlarged Board of Appeal is expected to hand down its decision in this case in the near future.

If it decides that such a simulation is technical enough for patent protection, this could be of great interest to AI developers. The decision of the Enlarged Board of Appeal could lead to a situation where a simulation of a technical system would also count as technical. This then becomes a model case which suddenly makes patent protection of similar software realistic, and which could furthermore ensure that the interpretation of the law, and thus the assessment of what is patentable and what is not, being broadened in favour of AI. This could mean that the Enlarged Board of Appeal moves the line between what is 'technical' and what is 'not technical'. In doing so, it potentially will become a model case with implications.

China and the US

Protection of intellectual property is very important when it comes to attracting investors. The better we can protect innovations, the more interesting it becomes for investors to invest in them. So a decision in favour of AI developers could cause a snowball effect. Not just for the entrepreneurs, but possibly also for Europe.

The protection of AI software through patent law is not easy elsewhere in the world either. If the simulation technology that is now being considered at the European Patent Office makes it easier to patent AI in Europe, then that would put us one step ahead of major powers like China and the US.

The Chinese patent office has undergone significant professionalisation in recent years, but in terms of its policy it quite emphatically sticks to the line followed by Europe. In the US, the policy has shifted quite a bit in recent years. Based on a 1998 case, it was modern and liberal for a long time when it came to the granting of patent protection on software. This made it possible for companies like Amazon to protect advanced, digital technologies. However, this policy changed in 2014, following a Supreme Court ruling which ruled that an algorithm alone is not enough for a patent. The software actually had to support a technical innovation. This made the American system old-fashioned and unclear in a similar way to ours. However our system may soon change.

At the time of writing, it was unclear what the decision of the Enlarged Board of Appeal was going to be and what the implementations of that decision were going to be. The European Patent Office is very much aware of the magnitude of the decision and is taking its time to carefully substantiate it. The decision is nevertheless expected in the near future.

If in that decision it turns out that this innovation, or at least many parts of this innovation, are considered to be technical, that will be a very positive development for AI producers. It will do the sector and possibly Europe's role in that sector a lot of good. If the legislation and infrastructure here are favourable, then developers will be more likely to settle here, which will have consequences on our economy. With a little bit of imagination, a Silicon Valley for AI in the EU may not be such a strange idea.

The courts in the countries that are party to the European Patent Convention generally follow the legal line set out by the Enlarged Board of Appeal. If that Enlarged Board of Appeal sticks to the existing line and the interpretation of what is technical about software remains the same, then we will be back to square one. In that case the situation will remain unchanged, and we will have to wait for two possible scenarios. Either Europe will make a move, or China, the US, or even another country will take the lead in this and we in Europe will decide whether or not to follow that line. Both scenarios are an unnecessary delay for developers, but in the second case it means that, from an economic perspective, Europe will miss a boat that could be the size of a cruise ship.

The future is just around the corner. Everyone is collecting data and the technologies for analysing that data are becoming more and more sophisticated. But who is going to put millions into developing software if they cannot be sure of the exclusive rights to that software?

Legislation is currently holding back innovation. It is up to the European Patent Office to take their feet off the brakes. A favourable decision could bring about the desired accelerated development of AI. This would be good for software developers, for European patent law and possibly also for the European economy.

It is only logical that something as complex as a legal form can never evolve as quickly as software, but it could nevertheless move with the times. Now that the science fiction of the past is increasingly becoming reality, we should not want to protect it with legal forms from the black-and-white era.

This article appeared in the December 2020 issue of AG Connect.