Patenting in times of crisis: First-to-file is crucial 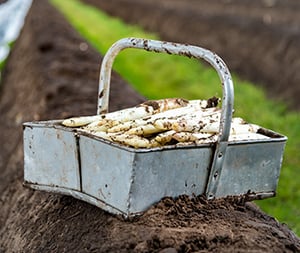 Even though the asparagus season is officially over, two Dutch entrepreneurs are already busy looking at future seasons. AvL Motion and Cerescon are both developing a harvesting robot for what is often referred to as white gold. They are in the process of devising and working out the details of a robot, and both already have a working machine.

A good development: harvesting crops such as asparagus by hand for days on end, often in a bent-forward position, is extremely hard work. On top of that the working conditions and accommodation of the people doing this at times leave a lot to be desired. Nobody in the Netherlands wants to take on this kind of work anymore. As a result, we are far too dependent on foreign workers who are becoming harder and harder to find. As from next year, it is expected that we will even have to look for people from outside the EU. As far as I am concerned, harvesting robots for this type of crop are definitely the future.

With the pressure of the Corona crisis, there is in fact currently an acute demand for harvest robots. Foreign workers are not allowed to come to us, and some of the crops cannot be harvested this year, which is a tragedy.

Who gets the exclusive patent rights?

But if earlier crises teach us anything, it is that inventions that offer solutions to them are made at a faster than usual pace. Apparently people are at their most inventive in times of crises. However, it is also considerably more common at times like this for several people to come up with the same invention almost simultaneously independently of each other. In patent land it is then all about the filing date of the patent application.  The actual date on which the invention was made is irrelevant. Only the first person to file a patent application will obtain the exclusive patent rights! The other party will then have to stop or pay a generous licence fee.

I therefore sincerely hope that the Netherlands will manage to obtain important intellectual property positions when it comes to the accelerated development of all kinds of harvesting robots, and other Corona-related inventions.

Both asparagus harvesting robot developers have already invested a great deal of time and money in their machines. They initially came up with slightly different operating principles, nevertheless, they still run the risk that one of them is able to obtain an important patent on a substantial improvement to a component that they both desperately need. For example, they both need an accurate and fast-acting picking and cutting unit, an accurate asparagus detection unit, and a fully automated sheeting removal and replacement system.

It never immediately becomes clear whether there is a possible patent infringement risk, because the process between filing and publishing a patent application takes eighteen months. They will only know once this time has passed whether or not they are encroaching on each other's territory when it comes to patents.

This is how you keep your competitors at bay

An appropriate strategy for protecting development processes that have now speeded up because of Corona, the labour market or climate change is therefore once again to make sure that you really are the very first with a filing date for your patent application. It is also important to put a patent monitor on your competitors, so that you are notified as soon as a patent application for them is published.

If you want to find out more about the asparagus robots, you can read the Dutch report on my visit to AvL Motion in de Volkskrant (in Dutch) here.