Patents in the cannabis market take off 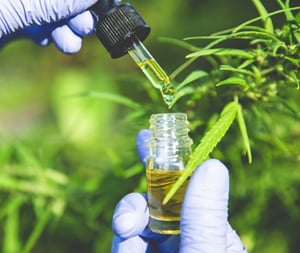 I had to look twice, but there it was. A cannabis plant! In my herb garden below my kitchen window. I had not expected it there and most certainly had not planted it. I had to laugh at its sudden appearance. It is almost symbolic for the rapid advance the cannabis plant is making now that more and more countries are legalising the cultivation of medicinal cannabis. This one plant is not a reason for me to start cultivating cannabis on a large scale, but the fact that this is happening is clear, among other things, from the large number of patent applications that are currently being filed in this field.

Huge cannabis plantations have started to appear in the countries where its cultivation has been legalised. Large multinationals are keen to get a piece of the action in this relatively new market. This includes the tobacco industry, which is innovating and patenting the use of cannabis in vape technologies, suppliers to the Dutch horticultural industry, who are working hard to develop greenhouses, climate control systems, transport systems and harvesting systems specifically for cannabis cultivation, and the biggest market of all, the pharmaceutical industry. Here, amazing things are being done in the field of, among other things, pain relief with medicinal cannabis.

Patent US-6,630,507 which was established in 1998 and has since expired lies at the root of this. It protected the invention that extracts precisely those components from cannabis that are important for medicinal purposes. A salient detail is that the US government held the patent on this. And this while the US only recently legalised cannabis in parts of the country.

Patent applications related to the cultivation and processing of cannabis have increased dramatically in recent years as a result of the legalisation. Close to 6,000 (!) patent applications have been filed in the past year. One of those patents is Charlotte's Web Holding's recently granted plant patent USPP30,639. They developed a cannabis plant that contains the medicinal benefits, but not the psychoactive cannabinoid. The company decided to call the plant Charlotte's Web, after the American girl Charlotte Figi. At a very young age, doctors diagnosed her with a severe form of epilepsy. Her seizures sometimes lasted for hours, and ICU admissions, intubation and resuscitation were common. Charlotte's parents were desperate and feared for her life. Doctors were at their wits’ end as they no longer knew what to do for the girl, who by then was having about 300 seizures a week. That is, until Charlotte's parents were made aware of medicinal cannabis. Medication made from the Charlotte's Web plant not only gave Charlotte Figi her life back but many other patients as well. Charlotte Figi hardly has any epileptic seizures nowadays thanks to the use of this medication.

Are you ready to hit the market?

If you are also planning to explore the medicinal cannabis market, I would definitely advise you to have an exploratory Freedom-to-Operate study carried out first. This will considerably reduce your risk of patent infringement. There are separate classifications for this within the patent databases. This will give you a good idea of what already belongs to the free prior art and where the chances of obtaining meaningful protection may lie.

And what about the weed plant in my garden? It seems that mixed birdseed may contain cannabis seeds. I am just going to leave it; it is not in anybody's way.

Applying for a patent? Give...

A Third Party Observation: an...