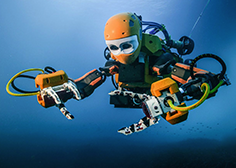 A robotic diver, called OceanOne, developed at Stanford University in the US, autonomously recovered an antique vase from the wreck of La Lune near Toulon. La Lune used to be the flagship of French Sun King Louis XIV.

The robotic diver is able to work virtually autonomously thanks to algorithms that receive data via sensors and cameras. The robot, which is modelled on the human body and has a head, arms and legs, is fitted with bow thrusters that are controlled by the algorithms. This makes it possible for the OceanOne to avoid any obstacles on its course.

The robot is controlled via a dinghy. The pilot can leave a great deal up to the OceanOne. In addition to camera images he will also receive haptic feedback. The robot's wrists are fitted with force sensors and allow the pilot literally to feel what the robotic diver is grasping with its hands. This makes it possible to pick up delicate objects and move them to safety.

La Lune sank off the French coast in 1664. It was laden with valuable items and had about one thousand troops on board. They were on their way back from a battle they had lost against the Ottoman army in North Africa. The ship was not allowed to enter the port of Toulon out of fear that it might be carrying the plague. La Lune ended up at a depth of close to one hundred metres. That is deep enough for it not to get plundered by amateur archaeologists.

The OceanOne can dive down to a depth of one thousand metres. The robotic diver has been developed as an alternative to the usual robotic divers used in oil fields at a great depth. These are big and clumsy, not very manoeuvrable in confined spaces and cannot be controlled intuitively whereas the OceanOne can. The latter makes is highly suitable for research into shipwrecks and vulnerable coral reefs. 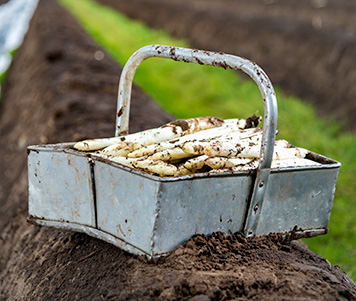 Patenting in times of crisis:... 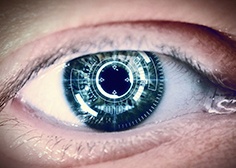