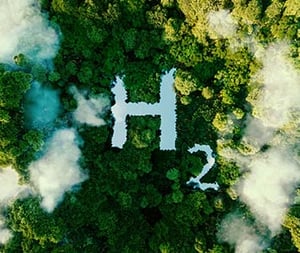 The environmental organisation Natuur & Milieu’s hydrogen ladder shows which applications hydrogen is most suitable for and if there are any sustainable alternatives already available for these applications. What stands out is that where the greatest environmental gains are to be made – at the top of the ladder – is where the least innovation is taking place. It is time for a shift in thinking and, above all, in innovation.

Applications for hydrogen are currently solutions that in the main are of interest to consumers such as hydrogen-powered cars and, slightly bigger, hydrogen-powered trucks. These are great examples as everyone understands what they are. The production of steel or fertilisers is less appealing to the imagination. These nevertheless appear high on the hydrogen ladder. The impact of a hydrogen application is great and alternatives are almost non-existent. The opposite is true for many consumer products. An electric car, for instance, is often a good alternative to a hydrogen-powered car.

For steel and fertiliser production, fossil fuels such as natural gas and coal are mainly used. Even though some Dutch companies have been considering hydrogen solutions, there have not been any actual breakthroughs yet. And that is fairly remarkable as there are no alternatives on the market while there are for the more common hydrogen applications, such as cars. Think of batteries and fuel cells.

A market in which there is still little competition but which offers guaranteed success. What more could you want as an entrepreneur? If you are the first to come up with an innovation and protect it with a good patent, then you are sitting on a gold mine.

Some players in the Netherlands are already doing well. For example, an electrolyser is being developed for the fertiliser factory in Zeeland that can supply the necessary hydrogen and thus does away with the need for natural gas. But as a large amount of fertiliser and steel is being produced in the Netherlands there is room for more development. An analysis of the patent landscape shows that there is still not very much patenting in the fertiliser sector. The patents that do exist are held by a few big players. These companies pursue their patents in a lot of countries. You only do this if your innovation is attractive and sufficiently profitable.

The question is not if there is going to be a shift to hydrogen applications in the steel and fertiliser sector but if you, as an entrepreneur, are going to be involved in this development? The time is ripe as the market is moving in that direction. So do not focus exclusively on consumer products with the possibility that an alternative to hydrogen is going to win, but take a broader look at the potential of hydrogen.

It is not just in the interest of entrepreneurs to focus more on promising innovations at the top of the hydrogen ladder. There is also a public interest. The Climate Plan objectives for reducing CO₂ emissions are crystal clear. The government would therefore do well not to go all out for applications for which there are already alternatives available. At the top of the ladder, emissions are high but there are no alternatives available. It is therefore important, also for governments, to encourage technology that has a major impact on reducing emissions. Modifying a couple of large factories is probably more straightforward than replacing all the cars in the Netherlands and all the infrastructure required for fuelling and charging. However, the environmental gain could be higher.

How does patenting fit in with this development?

By innovating in a market that offers a lot of opportunities, but in which not a great deal is happening yet, there is a good chance that you will be the first with an innovation. However, that in itself is not enough. A patent protects your innovation against copying and puts you in control. You decide who may use the application and you reap the financial rewards. It is a good idea to make sure that you are able to defend yourself with a patent, especially when, as a smaller organisation, you want to operate in a market in which bigger players are already active.

There are countless examples of small players bringing large competitors to their knees by means of strong patent positions. For example, when it comes to steel or fertiliser production using hydrogen, a small player can acquire a position as an indispensable supplier of certain innovative components - if these components are well-protected by a patent. The large players that manage the production sites are then not able to get around the small supplier.

If you are considering innovation in hydrogen applications and you would like to find out more about the role of patenting in this, then EP&C's patent attorneys will be able to tell you exactly what the sensible steps are. They have extensive experience including in steel production.