Patents and China: We are in this together, part 2.

At the end of October, the co-founder and main man behind Alibaba, Jack Ma, visited the Dutch horticultural sector. That Ma is a smart guy. He initially became very wealthy thanks to his Internet companies but now has his eyes set on the innovative Dutch horticultural sector. I would have loved to have met him. And what a pity that certain media immediately felt that they had to frame this in a negative way with headlines such as: Is Chinese Alibaba CEO 'stealing' secrets from Westland glasshouse horticulture? In part 2 of this blog, I will explain why I think this is wrong. There are also some persistent misconceptions about China in my particular field which I would like to counter.

The second misconception is that it makes no sense for a Western company to apply for a patent in China. Apparently it is a waste of money because they would start copying the invention in China anyway and would not respect any patent rights in the process. In reality the situation is quite different in this regard too.

The five leading patent granting authorities in the world are:

Together they have been working on harmonisation and ways to improve quality, service and efficiency for several years now.

The IP5 have created an important patent highway by offering patent applicants the opportunity of speeding up the granting procedure. This can be done by allowing the various patent granting authorities to use the first drafted novelty report or patentability search. This leads to more uniformity in the scope of protection, and also not least to cost savings for patent owners and a workload reduction for examiners.

Below you can see how much use is already being made of these types of PPH requests in China, using the work of examiners from Europe, Japan, the US and South Korea: 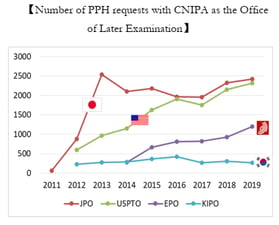 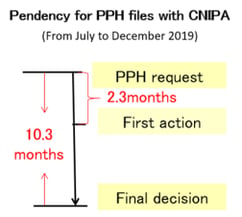 It has also been shown that this helps to significantly shorten the granting procedure in China.

China has also undergone major developments in the field of its patent jurisdiction. There are three specialised patent courts in China that handle infringement cases, namely in Beijing, Shanghai and Guangzhou. I have been to each of these cities.

More than 3000 patent cases were filed with these specialised patent courts last year. Only 10% of them were filed by a Western company. Most of the litigation was between two Chinese companies. The number of judges, mostly technically and legally trained in patent law, is so high that they have to deal with around 80 patent cases per judge per year. 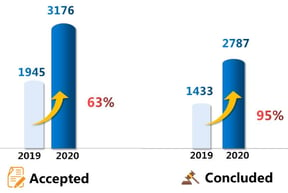 The majority of these disputes ended in a settlement. Of those cases that required a court ruling, analysis shows that Western companies certainly do not need to be afraid that their Chinese opposing party is going to be favoured in any way. The number of cases in which the Western company came out on top is simply too high (up to more than 70%). See: How-do-foreign-parties-really-fare-in-Chinese-patent-litigation.

I myself was also involved in a patent case for an SME in China in which it was not possible to reach a settlement and we had to fight until the bitter end. I must say that this was a positive experience and that we managed to win the case more easily, more quickly and more cheaply than I had thought possible.

At the time, the most important thing was an infringement ban and the destruction of the production moulds (it concerned a multi-material injection moulding product), to ensure that no infringement of the same product could occur elsewhere at some point in the future. Unfortunately, it was not possible to claim serious amounts of damages at that time. However, in June 2021, the possibilities to do this were further expanded and, in addition to loss of earnings, substantial damages can now also be claimed and awarded.

Time for a review

Applying for a Chinese patent and getting it granted has largely been harmonised with what we know in the rest of IP5. The quality of the China National Intellectual Property Administration is definitely not inferior to that of the others and, just like the others, it works very meticulously and professionally. In addition, it is definitely worth tackling patent infringements in China. Specialist, experienced judges administer justice in patent cases without regard to nationality.

When you consider the large volume of cases, my admiration and respect for how quickly China has been able to accomplish this increases. China is not only rapidly transforming into a self-innovating nation, but is also offering Western companies the same legal certainty that innovative Chinese companies can expect and receive in the West. And a headline like the one quoted earlier is no longer appropriate.

Next time we will continue with a revised protection strategy for China. For those of you who are curious to find out more: listen to this Radio excerpt from BNR Nieuwsradio (in Dutch. I recently had the honour of joining this programme as a China patent expert on the topic: Chinese companies are taking their patent policy more and more seriously. It is becoming increasingly important to properly protect your innovations in China!