What do you need to know about patent licensing? 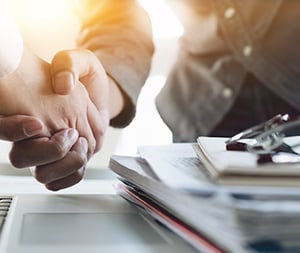 A patent gives you the exclusive right to manufacture and commercially exploit an idea. It is possible to share that right by means of a licence. A licence is a contract between two parties in which agreements are laid down about the use of that patented idea. It is an attractive way for licensors to benefit from their patent financially. For licensees it can be the quickest and easiest way to use an idea that is important for their own production. But what do you need to know about licences?

What is a licence?

A licence is an agreement between two parties, which lays down the extent to which the licensee is allowed to use the licensor's patent. It is a legal contract that can cover anything you are able to set out in a patent: processes, end products, semi-finished products and more.  The extent to which a licensee is allowed to use those things is also laid down in the agreement. That is why it is possible to distinguish at least five types of licences:

The licensee is granted the right to use a patent; the licensor may also grant this right to others.

Only the licensor and licensee are allowed to use the patent. The rights are not granted to third parties.

Only the licensee is allowed to perform the restricted actions laid down in the patent. The licensor remains the owner of the patent but may no longer make the patented product or exploit it commercially. This mainly happens in the case of inventors of a technology that they themselves are unable to apply on a large scale, for example, if someone as part of their hobby creates an invention that the automotive industry is desperate for.

This is a rare form of licensing that the government can impose on a patent holder.   You can read more about this here.

This is an exchange of licences between two or more parties, which allows the parties involved to move forward. This fairly common in the telecoms industry, for example.

Why opt for a licence?

For a licensor, a licence is an easy way to make money from a patent, without having to make further investments or exploiting the invention itself.  It can also be an attractive option for an inventor who does exploit his invention to issue licences. For example, to a licensee who operates in a market different to their own.  Depending on what is agreed, the licence can generate different types of revenue, such as fees for the use of the invention or a percentage of the profit margin on products sold.

For a licensee it is often the quickest and easiest way to use a patented idea without infringing. Sometimes it is the only way.  Developing an alternative can be expensive and time-consuming, or simply impossible due to a lack of facilities.

When to engage a patent attorney?

As with all matters concerning your intellectual property, it is wise to speak to a patent attorney at an early stage. We can advise you what the best option for you is, given the nature of your organisation and the market. Is it advisable to apply for or issue a licence?  How exclusive should it be and how much should it cost? These are all questions you need to ask yourself before you enter into negotiations. If you intend to take out a licence, we can take a look at the contract beforehand to make sure the agreement covers your interests.

How do I issue a licence?

You do not, and neither do we. Writing a licence is something that is done by lawyers. They specialise in properly and thoroughly preparing agreements that are legally valid. We work with several competent companies and can refer you to a good lawyer.

How much does a patent licence cost?

The cost of a patent licence varies from case to case and depends on both the negotiation process and the agreements made.  The licence agreement may be simple or very complex and can specify various factors, such as the term of the licence, exclusivity, applicable law, etc. As a result, the cost of a licence can vary greatly.